Post-disaster repairs: the prequel and a splintered worldview

If you ever catch yourself wondering about social justice and infrastructure delivery, then this mini-series of blogs about post-disaster repairs is for you.

As the response to Yolanda unfolds in the Philippines, this is also good moment to remind ourselves what the Tsunami Evaluation Coalition said about international humanitarian delivery, equity and livelihoods after that disaster. Key findings were that: “many recovery projects focused on physical assets. This meant that those who had held physical assets before had them replaced, with the effect of providing more aid for the better-off than for the poor” and the international community took a view of livelihoods that was “stylised and often media-driven” and that romanticised “own-account production as inherently more ‘sustainable’” in ways that resulted in “narrow and inaccurate conceptions of how best to promote equity”. Anyone involved probably finds it difficult to see this as a conspiracy (we tried to do good) but can’t dismiss it as accident either (we acted deliberately).

So, this first post sets out the ways that I try to understand whether the world is strange by accident or by conspiracy: I am basically downloading my worldview. Like all worldviews, it is too familiar to me now to see whether it is actually trivial or useful as a “political economy for engineers” but it helps me. And if you prefer text to charts, here are some of my favorite ways to tell it as a story:

“Usually whenever Owen reflected upon the gross injustices, and inhumanity of the existing social disorder, he became convinced that it could not possibly last; it was bound to fall to pieces because of its own rottenness. It was not just, it was not common sense, and therefore it could not endure. But always after one of these arguments – or, rather, disputes – with his fellow workmen, he almost relapsed into hopelessness and despondency, for then he realized how vast and how strong are the fortifications that surround the present system; the great barriers and ramparts of invincible ignorance, apathy and self-contempt, which will have to be broken down before the system of society of which they are the defences, can be swept away.”

“If You’re an Egalitarian, How Come You’re So Rich?”

The back story is that when I started as a project engineer for Fulcrum Consulting in 2001 I got a chance to work on the regeneration of the Thames Gateway and develop showcase master plans for Z-squared: a zero carbon, zero waste development of two thousand homes. The excitement gradually gave way to unease, prompted by a visit to a friend in Deptford. He had recently moved into a shiny, gated development: lots of glass, a concierge, a gym, a hefty service charge and a view up and over its dilapidated neighbourhood across to the city of London. I started to get nervous: would I be Frankenstein to my monstrous sustainable master plan: imposing a ‘community’, not just gated by CCTV and a fence, but disconnected from the pipes and wires that it might once have shared with shabbier neighbours? I worried about a strange autonomy of infrastructure where a common interest in maintenance and investment would wane and what had begun as a lifestyle choice would become self-reinforcing, technological segregation where the impacts of rising gas, electricity and water costs would be felt asymmetrically for generations.

Anyway, I ended up doing a PhD which ended up with delving into what was missing from the sustainable livelihoods framework, particularly the connections between urban poverty and physical infrastructure.

I was looking at the configuration of networked infrastructure, in this case water systems. When I use the term “configuration”, I mean both the physical system and the relationships between consumers and producers that shape each other and shape the way money grinds through the world and gets laid down for a long time in the built environment. When you think about configuration, you have to imagine it in your brainium. There are no pictures but a few descriptions of the system and the people but the best way to think about it is to use your own examples: your mobile phone contract, health insurance, “drive like a girl” car insurance policies.

There are 4 domains. But it is possible to transform or transition or incrementally push your networks into other spaces. This is happening all the time but you might have particular ideas about the policies, incentives, gadgets and algorithms that might push the configurations one way or another.

In the bottom right quadrant, for example, people might have a shared well. They are autonomous and get on fine unless there is a drought and then this sort of event impacts everyone in a similar way and neighbours can’t turn to neighbours. It’s a local risk group. 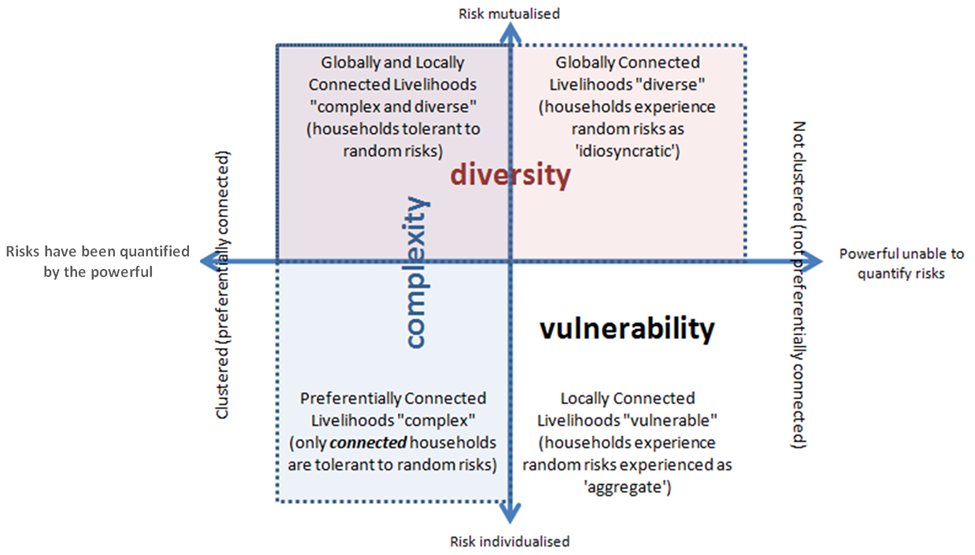 Fig 1: spaces of configuration with terminology taken from Robert Chambers’ book Whose reality counts? Paul Cilliers book on complex systems and  the case study on Catastrophe risk insurance in the Caribbean here and Section 8.4 of Debraj Ray’s standard text on Development Economics.

In the top right quadrant, imagine a municipal network where everyone is connected. There are a few different water sources – some wells, a lake, a network of reservoirs and the operator provides more or less a universal service – all people, same water quality, water pressure etc. The relationship is based on customers paying a water rate which is pretty blind to consumption volumes or patterns (but not necessarily to property value or location). If one pipe breaks or a well is out of action, there are some back up options. In the language of engineering resilience – network redundancies and diverse sources.

Down in the left hand corner is a configuration based on a “marketed” service where charges are based on consumption amounts and patterns. But not just that – and this will be familiar to people in the UK following the energy price debate – pricing is also based on how likely you are to switch/complain/give up personal data about yourself. For “riskier” consumers, including people unwilling or unable to pay on time or to provide data about themselves (like a credit history or a bank account to pay monthly), it can be more like a pay-as-you-go relationship where you pay higher unit prices and get denied some privileges or services. The configuration of this service for those people starts to slip back in to the bottom right space again.

But I thought that maybe up in the top left quadrant, there was room for another model: a magical, utopian global shire. The example from my research was a system down the valley where there was more or less continuous peri-urban settlement with each community gradually setting up small networks but looking for collective/common ways to fund, procure, maintain and get technical support, in particular for things like chlorination.

Surely, I pondered, somewhere over the rainbow there was room for globally synthesised knowledge and expertise or financial mechanisms – savings, loans, insurance – where systems could be configured such that, even as powerful providers are better able to quantify risk, the imperative might be to mutualise risk further by connecting, learning and spreading exposure as a global risk group rather than splintering and bypassing or discriminating against those considered risky. 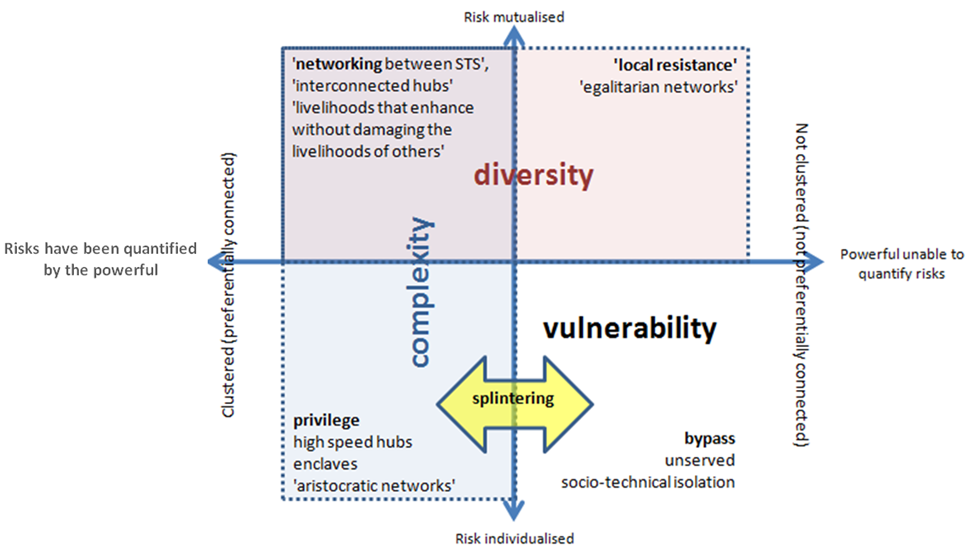 Fig 2: spaces of configuration showing the tendency to splinter with reference to Marvin and Graham’s Splintering Urbanism and terminology from Infrastructures of Consumption by Bas Van Vliet, Heather Chappells and Elizabeth Shove and Arjan van Timmeren et al.’s article on sustainable development

Perhaps if you worked for the right provider, an idealistic one or a not-for-profit, you could operate in the top left-hand space. The forthcoming mini-series charts the highs and lows, drama, disillusionment, infatuations and revelations as I realised this wasn’t quite true…

Splintering and the risk of repairs

But how, you may ask, does this relate to repairs? Well, what I am suggesting is that money tends to skirt risky things, especially in the built environment, infrastructure and service provision. This, as I discovered, includes aspects of humanitarian aid and repairs after disasters are considered one of those risky things that money skirts. Just like any useful support for people that have dropped off (or have never been on) the radar, it’s complicated targeting repair programmes at those least likely to have access to: formal tenure; low risk, affordable sites; building permits; and technical advice, good builders and high quality materials. And then if programmes never get off the ground, repairs (slowly) and inevitably take place without technical support and approvals and, consequently, without financial support from donors which might leverage further investment and increase quality and speed of repairs.

And this is one way of interpreting what the Tsunami Evaluation Coalition observed.

What I will go on to ask in subsequent posts is whether the reluctance to repair and perception of risk is for lack of evidence that it might be a good thing to do relative to alternatives or whether evidence is just a bit player in teasing the money towards riskiness (and uncertainty).

← Learning “lessons learned” from past disasters
Typhoon in the Philippines: reading between the lines of sensationalist journalism →