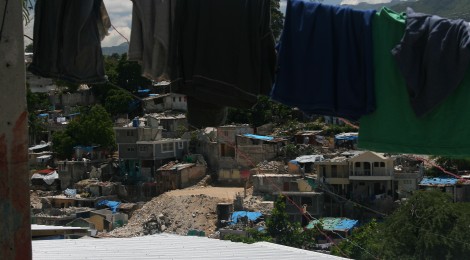 What do integrated neighbourhood approaches in Port-au-Prince, camp management-based approaches in Baghdad and participatory slum upgrading in Bangkok have in common? – well, a lot actually. For a start, at the core of each of them is some form of neighbourhood-based planning approach, and while these interventions may be facilitated and championed by different actors, and be taking place in response to different situations on the ground – the impacts of natural disaster, displacement due to conflict, or the threat of eviction from mega projects – there are a number of fundamental similarities in these approaches.

While development and recovery processes require a focus on multiple scales and entry points, this post focuses on the scale of the neighbourhood, and as such, to state that the approaches used in each of the above cases are different angles on the same thing is hardly a revelation, as I’m sure a historical view point of how these approaches developed would show some similar beginnings and influences. So while the similarities between these approaches are not such a surprise (or at least I guess they shouldn’t be), what is more interesting perhaps is to try to think about how and why they differ – how do these approaches challenge one another, and what can be learnt?

So what are we looking at?

Participatory slum upgrading approaches have been undertaken in a huge number of countries to improve living conditions in informal settlements. These approaches can take many forms, the participatory approach of CODI in Thailand for example is a case that is often used to demonstrate how organisation and mobilisation at a grassroots level can develop into neighbourhood wide upgrading programmes, and expand, creating networks between multiple neighbourhoods and multiple cities.

Camp management-based approaches in urban areas commonly involve working in ‘non-traditional camp settings’. In Baghdad for example rapid influxes of internally displaced people (IDPs) and migrants, along with a lack of housing options for the urban poor has led to the formation of hundreds of informal settlements over the last decade. In Baghdad, while drawing on tools used in camp coordination and camp management, approaches taken by some international organisations are quite different to how traditional camp management is perhaps viewed, taking much more of a strategic and enabling approach in seeking durable housing solutions for IDPs and others living in informal settlements.

Similarities in approach in these three cases include organisations taking on a more enabling and facilitatory role with an integrated and holistic view of a neighbourhood, a focus on participation, building capacity, developing organisational structures within communities, empowering, enumerating, advocating, and forging links and creating platforms between communities, local authorities and service providers.

There are however some aspects that while being key in some cases are far less common or less emphasised in the others. Three examples of this include:

Networks: Another key aspect of slum upgrading is the formation of networks of the urban poor and slum communities to enhance learning exchange and increase strength for advocacy. This can be at a variety of scales, from city level networks, to regional networks such as the Asian Coalition for Housing Rights, and global networks such as Slum and Shack Dwellers International. In post-crisis contexts however, the development of networks seems far rarer, with different NGOs working in separate neighbourhoods, and while some learning may take place between them, the formation of networks between residents does not seem to be prioritised.

Considerations of host/surrounding communities: Something that approaches coming out of camp management perhaps have to offer the other approaches however, is the built-in consideration of the host (or neighbouring) communities, recognising the importance of seeking common ground and not re-enforcing divisions though directing assistance at only one group. While slum upgrading programmes often involve forming networks of the urban poor they don’t necessarily forge relationships with other groups of citizens, or those neighbouring them. Integrated neighbourhood approaches in Haiti for example often formed a strict boundary of how a community is geographically defined, directing assistance within that demarcation.

These are three cases that I’ve had some involvement with in different capacities over the last few years, and thinking about the differences in these similar approaches makes me wonder to what degree this is due to adaption, omission, something in between, or something more fundamental.

Adaption of approaches and techniques from one context to another is natural and necessary. For example, if savings groups or other forms of micro-finance were to be encouraged in post-crisis contexts, then this would most likely need to be done in a different way; when is appropriate timing for this and how could the process be kick-started? Or, perhaps it is considered, deemed inappropriate at a certain point in time and thus not integrated into a programme.

Perhaps however, some elements of approaches are not included due to oversight or omission. Do the people on the ground developing a certain programme know of how similar approaches have been used in different contexts? Or has the parallel development of approaches in different geographies or disciplines (i.e. development, natural disaster, conflict) meant that they don’t necessarily share and learn from one another further? How guilty are we all of being too self-referential in our learning and thus constantly re-inventing the wheel?

More fundamentally, are differences in approach between or within these contexts due to there being differences in what the actors facilitating and championing the approach are aiming to achieve? How are trade offs made in regard to constraints of resources, mandates and timeframes? And at what point do things get too political for humanitarian actors? This all relates back to fundamental questions of the role of humanitarian organisations in urban response and recovery, what they are trying to achieve, and how they can add value.

← Typhoon in the Philippines: reading between the lines of sensationalist journalism
Rebuilding away from the coast: Whose risk is really reduced? →